If you want to stop receiving calls from a lead, you can block their phone number in aNinja.

You can also block callers for solicitation and register your phone number in the National Do Not Call Registry.

In this article, we show you how to block a lead phone number in aNinja.

The lead phone numbers are located in the lead view, in the contacts section. To unblock a phone number, just click on the block icon to turn it back to black.

If the lead has multiple phone numbers, you might want to block them all. In this view, you can: To block a phone number, just type it in the box and click on Block.

Then the number is added to the list of all the blocked phone numbers and the block icon in the lead view turns to red. Afterward, the lead calls are immediately hung up. You will be notified on the mobile app and in the Inbox.

This automatically unblocks the phone number and turns the block icon in the lead view back to black.

You can filter the results to appear by user if you are a user with Admin access.

Otherwise, the users can only see the phone numbers blocked by them.

Bulk texting is an aNinja great tool that you use to nurture your leads and keep them updated with your latest campaigns, and offers, and send them reminders. Here are a few things to consider before bulk texting.

Things to consider before bulk texting

Here are some things you would want to consider/check before sending out your text blast.

To be able to send texts, you want to have a phone number saved in your aNinja account. Either you buy a new phone number from aNinja or you port your own.

If possible, provide a mobile number in the lead’s primary contact to ensure the delivery of your message.

When crafting a text template, you want to count the characters you’re adding to this text. A text is composed of 160 characters which is considered one segment. If your text exceeds 160 characters, it will be delivered to the recipients anyhow, but you will be overcharged for all the extra segments by your phone carrier.

According to your Billing plan (only for Advanced and Pro plans), each user can send 2000 SMS per bulk.

If you wish to increase your SMS limit, either:

1- Reach support at support@aninja.com and they will bump it up for you, with a one-time charge of 15$ for every additional 1000 SMS per user.

2- Enable the auto-recharge for Billing, that automatically recharges your add-ons once your plan included add-ons are hit.

3- Or, limit your bulk texts to 2000 SMS per bulk by segmenting the contacts in the CSV file before you import it.

You can export your contacts from Mailchimp and import them into your aNinja account to augment your lead database.

You can export an entire audience, a segment, or a group.

View or export an audience

To view or export your entire audience, follow these steps.

View or export a segment

To view or export a saved segment, follow these steps.

To view or export tagged contacts, follow these steps.

View or export a group

Your export may include a ZIP file that contains separate CSV files for each type of contact (subscribed, unsubscribed, non-subscribed, and cleaned). Unarchive the ZIP file to access the CSV files and open each file individually in your preferred spreadsheet application ( Microsoft Excel, Google Sheets, or OpenOffice Calc.)

With aNinja, you can change the order of the lead contacts in the way that suits you.

In this picture, this lead has 2 contacts. Demo (primary contact) and Demo1.

Does reordering the lead contacts affect the sequences and triggers

Reordering the lead contact does not affect the previously saved sequences and triggers. As their data was pulled on the day they were created and are waiting in queue till the launching date of the sequences or triggers. So any changes in the lead info after creating a sequence are not reflected in the sequences.

Does reordering the lead contacts affect the “do not contact”

So, if you don’t want your automation to reach a specific lead, make sure to mark ALL his contacts as “do not contact”.

In this article, we show you how importing your iCloud contacts into aNinja can be done in 3 steps. 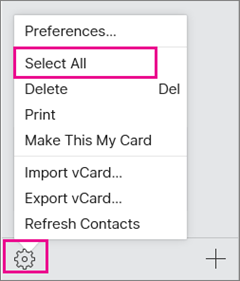 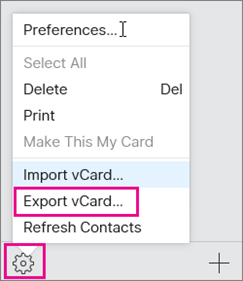 2- Converting the VCF file to CSV

Locate the VCF file in your documents. Select it and click the  Open button. Doing that will automatically load and convert the VCF to a CSV file opened in Excel.

If you don’t wish to import all the extracted contacts to aNinja, select the unwanted contacts and delete them from the CSV file before you import it.

To import the CSV file, go to Settings > Bulk Import.

Where does the imported data appear?

After the integration, you can search your aNinja CRM for the imported leads. You can also search for any custom field, opportunities, and any other info that you have imported.

Need help in importing your iCloud contacts into aNinja? Please leave us an email at support@aninja.com. We will happily assist you!

The lead’s contact section in the Lead View, shows all the contacts saved under your lead (employees of the same company, relatives, etc…). It’s a good component for filtering based on contact info. The lead’s contacts are email, phone number, and URL.

You can mark a contact as “do not contact“. They will stop receiving your bulk sequences. You can still send them emails / texts from the lead view.

Relocate the contact in the lead’s contacts if you have multiple ones. Drag it to the top. The first one in order will be considered the primary contact.

It is important that the lead contact are correct so your outbound emails and texts reach your leads successfully.

Moreover, if you’re intending to use the phone number for texting, save the mobile number as the primary number (first number in the contact). Otherwise, your text will not reach the lead.

However, you will be notified that your outbound was not sent due to the incorrect email address or phone number.

Just type the contact info on the top navigation bar, and aNinja will search all your CRM to find the lead(s) related to your search.

The results will show in the Leads View. For future use, go ahead and save the results as Smartlist. You can share your Smartlist with other users too.

Now, you can perform the below activities on the results in the Leads View:

aNinja was designed to show you all the lead activities and interactions in one place: the Lead View.

The lead view is divided into 4 sections:

In aNinja, creating leads can be done in several ways.

A growing database of leads means more potential engagement. So import your leads from different sources and keep them engaged with newsletters and product or service updates.

In aNinja, you can create leads in multiple ways:

2- Importing leads from a CSV file

In simple words, API is a set of functions that allow applications to interact with each other by exchanging data.

Basically, you can forward leads from your different marketplaces into your aNinja app using API.

Importing contacts from your Gmail account is another way to expand your leads database.

You can also get your phone contacts to your aNinja account.

By BCC’ing your private BCC email address, the system automatically creates new leads from the recipients.

After all, you want to get all your leads into one place to target them with your sales and marketing strategies.

7- Generating a lead from incoming SMS

This is a basic function in aNinja that generates a lead from an incoming SMS, if the phone number is not already saved in the system.

However, this practice is not available for incoming emails. So if the sender’s email is not saved in your system, you will not be able to see the email in aNinja. But it still shows in your email client (Gmail, Outlook, etc…).

Search for more help articles in aNinja Knowledge base.

Or reach us at support@aninja.com. Our support team will happily assist you.

When you don’t intend to message a certain lead, you can mark them as “Do Not Contact”.

Moreover, through triggers, you can stop emails or texts sequences for this lead separately.

All Email, text, and note templates are created in aNinja support variables. Using aNinja template variables allows for the automatic replacement of the contact’s name, for example in the outgoing email, text, or note.

In this article, we show you how to use the variables and what are the available variables in aNinja.

What are template variables

Injecting a variable in a template

will automatically put in the lead Contact name when it is detected in an outgoing email/template/note.

You can use the dropdown to automatically inject the variable you need at your cursor when editing templates.

Make sure to position the cursor in the template text where you want to inject the variable.

What are the available variables

Note: User variables refer to the system users – that is your accounts. Whereas Contact related variables have to do with a lead’s contact.

Need help using aNinja template variables? Just leave us an email at support@aninja.com. And we will happily assist you!