You might receive error codes returned by the telephone carrier after you’ve sent a SMS or MMS.

The telephone carriers filter all the messages to protect the mobile subscribers from spam and other forms of unwanted messaging.

And, these systems look at both message content and volume.

Filtering in the United States and Canada can affect the delivery of your SMS and MMS messages.

Where do the error codes appear in aNinja

When in the lead view, in the history section, you can see error in red on the right corner under the sent SMS or MMS.

Hover your mouse over “error” to see the error code.

Then, search for this code in the below section to understand the reason for this error.

Below are the most common error messages returned by the carriers.

When sending a text/SMS via aNinja, you would want to include a text signature at the bottom.

It is a powerful way to convey your professionalism to your readers and give them the information they need to contact you. It is placed at the bottom of each text, which helps leave a great impression and makes you stand out from your peers.

You want to consider the size/segmentation of the text when you include a text signature to avoid being overcharged.

Setting your text/SMS signature in aNinja 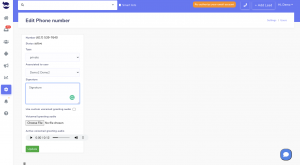 Text messages (SMS) are composed of segments. A segment is 160 characters of text.

When you send a text with more than 160 characters, it is actually billed as multipled texts. These are technically called text segments. Effectively billing counts the number of text segments.

When you prepare a text template, or you’re about to send a text to a lead from the lead view, you might like to include emojis and special characters to give it a nice design. We’ve included a character counter so you monitor the length of your text template. Yet, it’s also important to understand how many texts you are billed for. There is a fixed character limit for one text (160 alphanumeric characters per SMS text segment). Emojis and special characters might be counted differently. You also might want to watch out for invisible characters.

SMS industries count messages before sending them through your carrier. They count the number of characters that a text contains. Each segment is of 160 characters. But sometimes the character limit exceeds, and one text is converted into two. You’d end up with two messages on your bill.

The aNinja Programmable Messaging platform has a limit of 160 characters in a single incoming or outgoing message request. And that’s based on the text segmentation standard.

When you go over that, the system is automatically creating multiple text segments to send out your longer message.

Although aNinja supports large message payloads for all Messaging channels including SMS; it is important to understand that some wireless carriers and devices may behave differently than others when receiving long SMS messages.

In addition, the length of an SMS, and which characters are present (e.g. emojis, signs, and symbols) will affect its price, based on segmentation.

Some things to consider

In this article, we show you how you can schedule your text message to delay the delivery to send it at a later time and date.

To reach out to your lead, you can send him a text message via aNinja.

Start Messages and create a text message, but don’t send it. Choose the time you want to send the message.

Scheduling a text to be sent later

Checking the status of the scheduled text

You can see the scheduled texts only on the date they’ve been created. They don’t get rendered again when sent.

So you can check them in the lead view. Go back through the lead interactions to the date when the scheduled text was created.

The Lead contact is the lead info saved in the Lead View (email addresses, phone numbers, URLs). When the lead is created, the contacts are saved as entered/provided.

You receive an email notification that the email address of this lead is incorrect and your outbound did not reach him.

You can see an error message in red in the lead history.

Note: You also receive an error message after you send a text if the primary phone number is a landline number.

You can handle the outgoing SMS with an error code through triggers. e.g. mark as “do not contact” the lead with a landline number.

For a better follow-up on your outgoing sequences, aNinja created message statuses for the bulk text sequences.

You can also monitor the count of messages in different stats.

Where can I see the bulk text sequence message statuses

The bulk sequence sets itself to completed once all the messages have gone out.

In some cases, some messages get stuck in the “Outbox” because the carrier doesn’t return with a reply. The status of those messages changes to “Delivery unknown” in a few days.

The standard protocol is to give the carrier a window of 48 hours after the last SMS was sent successfully, before closing the bulk sequence (status done).

The stats column displays the count of messages in different stats, which includes:

If a message you sent is not delivered to the end device and returns a 30008 error code, this means that the delivery of your message failed for unknown reasons.

When our carrier receives a very generic error from the destination carrier that he has no further details about, he associates the message with the error code 30008, letting you know that he truly doesn’t know what caused this error from the provider.

We can still contact our Carrier to connect with the destination carriers to ask about the reasons/explanations for the unknown error.

As per the US country guidelines: https://www.twilio.com/guidelines/us/sms

Gambling content being sent in the US is not allowed.

For reference here is the documentation for sending MMS: https://support.twilio.com/hc/en-us/articles/223179808-Sending-and-receiving-MMS-messages.

The aNinja Inbox is a centralized view of all your incoming communication emails, texts, voicemails, missed calls, open tasks, and the chatbot conversations too.

You should be able to work exclusively from your aNinja Inbox.

From your Inbox items, you can:

The Inbox badge in the sidebar dynamically updates to show you how many Inbox items are available. Get reports on the workflow of your latest activities and interactions that you’ve made in aNinja in a certain period of time. aNinja reports are simple, understandable, and provide you with a detailed view of your business performance.

When every user can see his reports, admin users can see the reports of all the users.

On the top right of the reports page, you can select the period and the user you want to check his reports. Below are the reports provided by aNinja:

aNinja brings you the history of all interactions and activities made for a lead in the lead view.

What’s the history of interactions and activities

Since the creation of a lead in your aNinja account, the system saves all the interactions and activities that you have made to this lead, in the history section.

Moreover, they are listed in ascending order. So, the users and team members are kept in the loop of the actions performed on this lead.

In the history you can view:

From the lead view, in the middle right of the page, you can see all the interactions and activities of the lead.

With the automated Texts time window, you can schedule your texts so that they arrive at the most optimal time.

Specifying the time window for sending out text messages